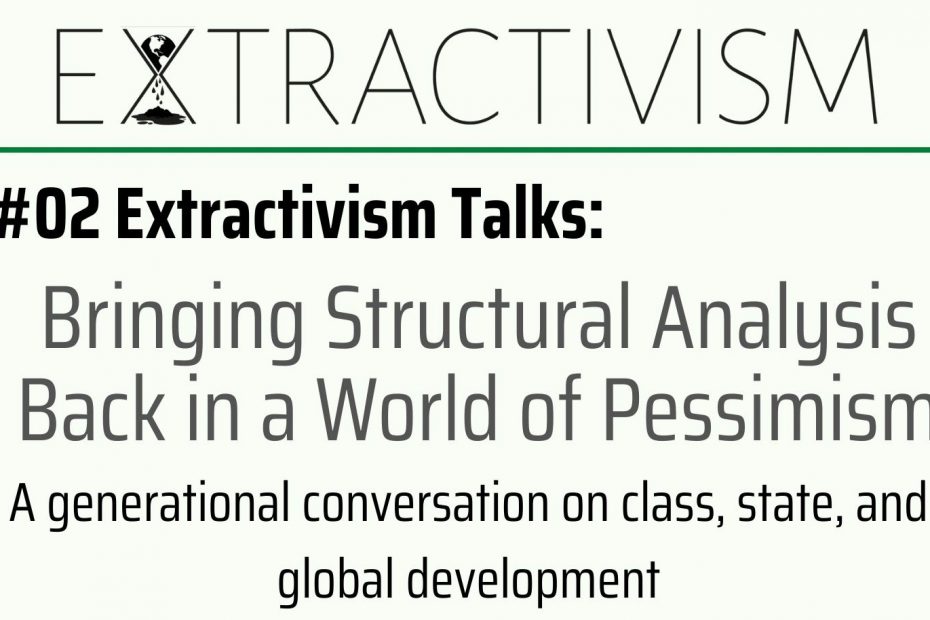 On March 11th, 2022, the collaborative research project Extractivism.de organized an online discussion entitled “Bringing Structural Analysis Back in a World of Pessimism.” The event consisted of two panels and brought scholars from different fields, topics, and cohorts to rethink the importance of state, class, and structuralism today.

The timely urgency of the topic justifies itself. Today, we live in a world of recurrent crises: the 2008 financial crash, the 2011 Arab Uprisings, the COVID-19 pandemic, and the current war in Ukraine show the global system is increasingly challenging in economic and political terms. While proposing the event, we argued that these crises are symptoms of a global asymmetrical structure that has not changed as many expected. Most mainstream Social Sciences doctrines, be Neoliberalism, Institutionalism, Realism, Constructivism or Neoclassic approaches, have offered insufficient explanations. Many optimistic predictions concerning growth, development, globalization, prosperity, and peace did not materialize. Instead, the pendulum is swinging in a pessimist direction, characterized by isolationism, conflicts, sectarianism, populism, and nationalism. While conventional wisdom in the West sough for a neoliberal utopia for decades, we suspect that structuralist theories that tackle the role of state and class within development trajectories are extremally helpful for us to grasp nowadays’ complex social struggles, conflict for resources, predatory consumption of nature, and inequalities on a global scale.

In one way or another, all the panelists seem to agree that to understand these events, we need to return to concepts such as class struggle, state interventionism, labor, and economic policies. In the first panel, Prof. Elsenhans discussed his theory of capitalism and state class and what it means for our perception of development, consumption, and the international division of labor. His work has been about rethinking the logic of capitalism as a relational concept, refusing the mainstream’s focus on accumulation. He has been arguing against the “demonization of capitalism,” which, in his view, should be seen as the unintended result of class struggle, not a goal in itself. Only through this rethinking can we comprehend development as the result of a proper mobilization of rents that raise mass income, indigenize technology, and, thus, increase demand – consequently, grasp progress within capitalist structures.

Prof. Khan‘s work has always stressed the importance of the local level within heterodox approaches, which has often been underestimated within structuralism. Through his political settlements approach, he has stressed that we need to focus on the efficacy of development policies and why they work in some places and why others do not. Therefore, he calls for abandoning one-fits-all solutions insisting on the need to seek more complex explanations. His work consists of mapping the equilibrium between a diverse set of institutions and organizations within each country to explain how rents are allocated and where are the barriers to devaluation-driven development in poorer countries. In his words, “we need to radically rethink what is implementable,” bringing institutions and history back and looking behind the process of rent distribution, development policies, government control and market structure.

Finally, Prof. Bresser-Pereira returned to his neo-developmentalism approach and the importance of a functioning, developmental state to push for economic transformation within the Southern countries. His work is knowingly critical of neoliberal and neoclassical approaches, and he has consolidated the discussion on the Dutch disease in Latin America. He argues that mainstream theories were inconsistent in differentiating what is institutional or culturalist issues (which include the natural resource curse) from economic problems, thus struggling to offer pathways to neutralize the Dutch disease. His talk stressed how the macro-level of analysis matters as much as the micro one when it comes to creating efficient, case-focused economic policies that consider the complex interaction between trade, industrial, and technological factors.

The three panelists concluded somewhat hopefully that now more than never is time to return to structuralist worldviews. They all agree that, for too long, mainstream economics has turned away from reality for the sake of universal models, overlooking essential issues of contextuality, history, and different class structures. Bridging these points, Dr. Kvangraven argued in the second panel that an exciting pathway to return to structuralism is via re-reading dependencia authors (particularly Samir Amin). She pinpoints how these theories were correct, stressing how development is inherently linked to global asymmetries. However, this return to dependencia must be to improve it, detect weaknesses, and update it. She gave particular focus to the need to bring intersectionality into this discussion – such as gender, culture and race –making the approach more in touch with today’s social-economic realities.

The critique that structuralism neglects many segregate groups and actors was also present in Dr. Stevano‘s presentation. Her work centers on the issue of social reproduction, particularly in poorer African countries, as she argues that this concept is central for grasping the gendered struggles about exploitation and reproduction ad the local level. She also talked about the resilience of colonial history on the social-economic structure of these societies, something key for us to grasp the dynamics of labor. Finally, she claims that an efficient way to bring new dimensions to our understanding of class could be analytically by exploring the studied object’s economic, social, and cultural aspects distinctively, without ignoring the overbearing pressures of the structure.

Dr. Rugitsky focused his talk on our question on recurring political disasters. He stressed it is essential to look into the bigger picture when explaining these crises, as they are the result of an accumulation of complex factors, without necessarily one causal and linear explanation. Concerning the intellectual scene, Dr. Rugitsky positions himself on the optimism spectrum. For him, scientists tend to be very reactive to political disasters, seeing them as windows of opportunity for pursuing new ways of thinking and finding solutions to complex problems. However, he also stressed that the economic system is increasingly constrained by superpowers with significant market shares, reducing development alternatives for the Global South countries. Like the other panelists, he concluded by returning to the importance of enhancing the complexity of our class structure understanding, mainly how differences within classes can be engines that maintain inequality and halt development.

Finally, Siebert brought the discussion to a meta-theoretical level, presenting the concept of uneven and combined development, originally from Trotsky, as a critical analytical tool for the points we raised throughout the event. To her, a problem of structuralism has been to imagine two entirely separate spheres – the domestic and the international – which drove the conception of inefficient economic policies. Instead, the uneven and combined development approach stresses the constant interaction between the social and the intersocietal levels. The international is then a space in which societies interact and create paths for their own development, which are inherently linked with the others’ pathways but still unique on their own. Moreover, she states that this concept of multiplicity is essential for us to understand different development paths and globally shared crises, like the COVID-19 pandemic or climate change.

Therefore, the discussion brought us to the central issues of the Extractivism project. The panelists stressed that not only has the world become more complex since the eve of the first structuralist approaches but also that the intellectual community – as well as its range of topics – got broadened. Discussions about class must include social intersectionality and other senses of belonging; the state needs to be confronted with new global institutions and transnational actors, and Development studies have to start asking development to whom and what for. Connecting international and domestic factors, detecting patterns of similitude and particularism within different countries with comparable insertion on the international division of labor, and grasping how actors distribute rents and plan their development paths: all these questions are part of our research initiative. 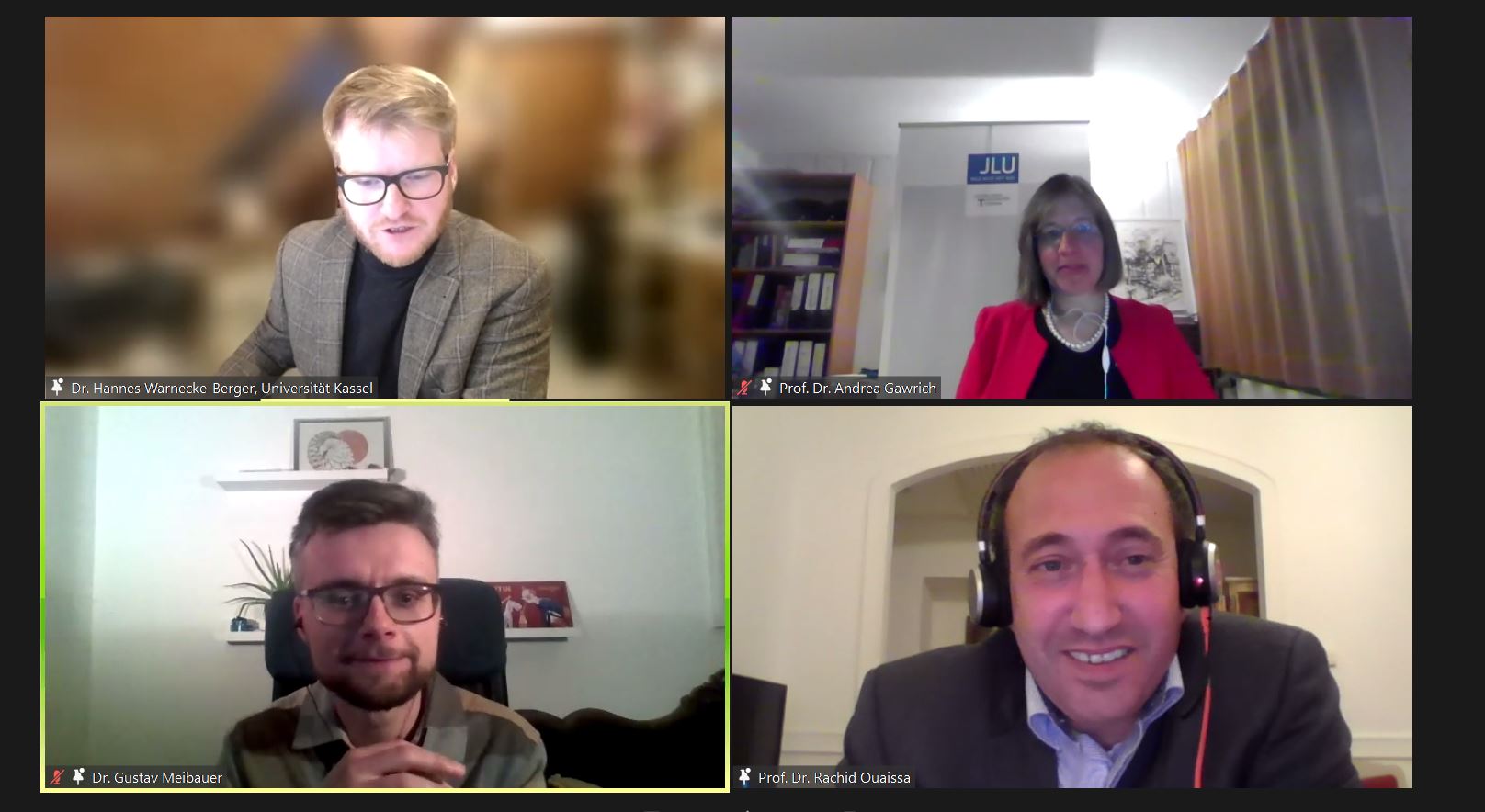 On 15 March 2022, the University of Kassel, CELA and the project network Extractivism.de organized an online discussion on the Russian invasion of Ukraine. A… Read More »Extractivism Talks #01: The World at a Crossroads – Impact of the Ukraine Crisis